The Bio Bidet BB 2000 Bliss Series is one of the latest offerings from Bio Bidet - one of the most trusted and recognized brands in the industry.  The BB 2000 offers some serious upgrades over the previous generation BB 1000, but still carries with it the excellent Bio Bidet brand and reputation.

The BB 2000 further enhances what was already a great product in the BB 1000.  It's almost as though Bio Bidet looked at every feature of the BB 1000, and figured out a way to improve on it.  The Bio Bidet BB 2000 features both posterior and feminine wash functions, but with a noticeably wider spray for a more thorough cleansing.  They have also upgraded the wash nozzle to stainless steel for a more durable finish.  Use the oscillation feature and the nozzle will automatically move back and forth beneath you, extending the cleaning area.  The water pulse feature is another great option to have which pulsates the water stream and provides a massaging effect.

Another enhancement with this model is the upgraded water heating system.  This new "Hybrid" heating technology takes the advantages of reservoir tank heaters, with the advantages of the on-demand instant heaters, and combines them into a single heating system.  This new hybrid heating technology also has a cosmetic benefit as well - the new BB 2000 Bliss is 25% slimmer in height compared to previous generation models, making the unit sleeker looking and more contemporary.

Not only is the unit an all-new design, but the remote control has been fully re-designed as well.  The remote control has been upgraded to include a large LCD display which quickly shows which features are being used and at which setting (e.g., low, medium or high water pressure).  You now have a choice of colors as well - choose a white remote or black remote to better match the decor of your bathroom.

The BB 2000 still has the other features you'd expect in a seat of this class  - such as a heated toilet seat, slow-closing seat and lid, air dryer, automatic air deodorizer, and energy saving mode just to name a few.  Watch the video above to learn more! 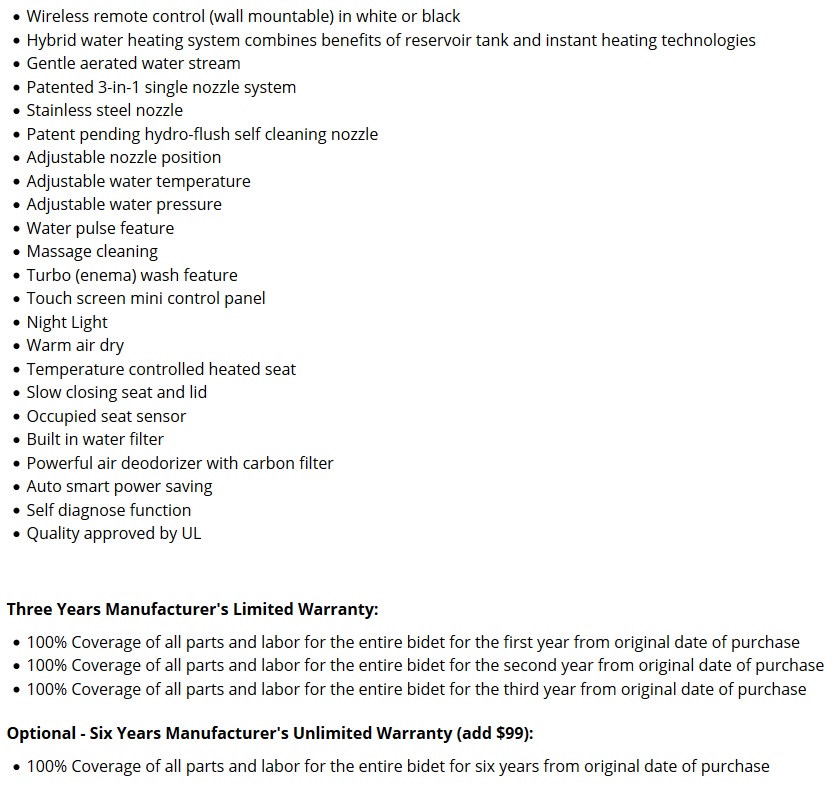 With over 15 years of manufacturing experience, Bio Bidet is one of the most recognized brands in the world.  The BB 2000 Bliss Series is their flagship model.  After a successful 10 year run with the Bio Bidet BB 1000, the all new BB 2000 comes completely redesigned with virtually every component upgraded to capture the latest in modern technology.

Here is a link to an official review of this seat:  bidetsPLUS' Bio Bidet BB 2000 Review.  But we wanted to give you our informal thoughts and write-up below as well.

Installation took about 20 minutes.  Once you get your existing toilet seat removed, it's really easy to secure the mounting bracket - two bolts secure the mounting bracket to your toilet.  Once the mounting bracket is secure, the unit slides onto the bracket and "clicks" into place.  A "T-Connection" or "T-Valve" is included with your shipment which "splits" your existing cold water supply so you can connect a hose to the bidet seat.  Then, you just have to plug the unit into a nearby outlet (the electric cord is 38 inches long and extends from the right hand side if you're facing the toilet).  All parts for installation come included in the box.

The Bio Bidet BB 2000 Bliss is operated with a wireless remote control.  The remote control actually comes in your choice of two colors - white or black.  We chose white because it went with our bathroom better.  A wall-mounting bracket comes included so you can hang the remote on the wall next to your toilet.  The mounting bracket comes with double-sided tape on the back so it's easy to stick.  Alternatively, you can use the two mounting screws which come inlcuded and just screw it on to your wall if you prefer.  Once the mounting bracket is secure, it's easy to slide the remote in and out so you can hold the remote in your hand.

The BB 2000 has a rather long list of features (listed above).  Rather than re-hash all of them, we will go over some of the highlights that differentiate this model from other seats.  A stainless steel nozzle is one.  This is an upgrade over the previous generation BB 1000 (and most other seats) which had plastic nozzles.  The Bio Bidet 2000 Bliss is also equipped with an advanced Hybrid Water Heating System.  Most seats nowadays have moved to tankless heating which has many benefits over the older reservoir tank heaters.  One of the drawbacks with tankless systems however, is that sometimes you may feel a split-second of cold water when the wash starts as the water heats up.  But not with the BB 2000.  The engineering team cleverly designed a solution that integrates tankless heating that always starts warm.  The result is a warm water wash that starts at whichever temperature you set.

Another area of difference is water pressure.  While most other seats offer spray volume in the neighborhood of 0.5 liters per minute, the BB 2000 outputs 0.7 liters per minute - about 40% more water.  This is important because water pressure is a big driver behind the performance and efficiency of a bidet toilet seat.  There are 5 different settings you can set the water pressure at with the BB 2000; we found the 3rd setting setting to be as strong as the maximum setting on most other seats.

A convenient feature we found on the Bio Bidet 2000 is you can program the remote to automatically oscillate and/or pulsate the water stream when starting your wash.  To put this in perspective - to "wash and oscillate" on another model, you would have to hit two buttons on the remote - Wash, then Oscillate.  Or if you wanted to "wash and oscillate and pulsate," you would have to hit three buttons on the remote - Wash, then Oscillate, then Pulsate.  But with the BB 2000, you can program this into a single touch of a button.  We were really impressed by this feature as it's not offered on any other bidet seat today.  It's very useful since most users do use the oscillate feature when washing.

We also need to mention the night light and the clock on the remote control because they are really neat, unique features.  The night light is awesome and it really works!  And it makes the seat look really cool and your toilet high-tech.  It emits a cool blue light from the side of the seat so you can quickly find the toilet in the dark.  In fact, it even looks good during the day.  Our only wish is that it would automatically turn off during the day; you have to turn it off manually on the remote control.  Or you can leave it on 24 hours a day - since it's powered by LED, the electricity draw is minimal.

The clock on the remote control is pretty useful too.  It's not something you think about until you have it.  Because really, who has a clock in their bathroom?  Nobody.  But when you have a clock on your remote control, you do actually look at it.  You can see how much time you have left in the morning, as you're getting ready in the bathroom.  Or you can see what time you're putting the kids to sleep today, as you brush their teeth at night.  It's handy to have.

And just a couple more quick hits:  (1) the spray on the BB 2000 is noticeably wider than the previous generation BB 1000, and wider than most other seats we've tested.  There were some complaints that the spray on the BB 1000 was a bit "sharp."  And (2) yes, you CAN turn off the automatic air deodorizer fan on the Bio Bidet 2000.  We've heard feedback from customers wishing they could turn the fan off on previous models, because of the "whirring" sound that goes on (especially if the bathroom is adjacent to a bedroom).

Boy that was a long Editor's Note, and we didn't even touch on the basic features.  It just goes to show how much we have to say about this product.  Just a bunch of subtle differences and when looked at all together, makes for a bidet toilet seat that stands apart.  Very detailed in its craftsmanship.  Bio Bidet has been around a long time and it is evident in their design of this seat. 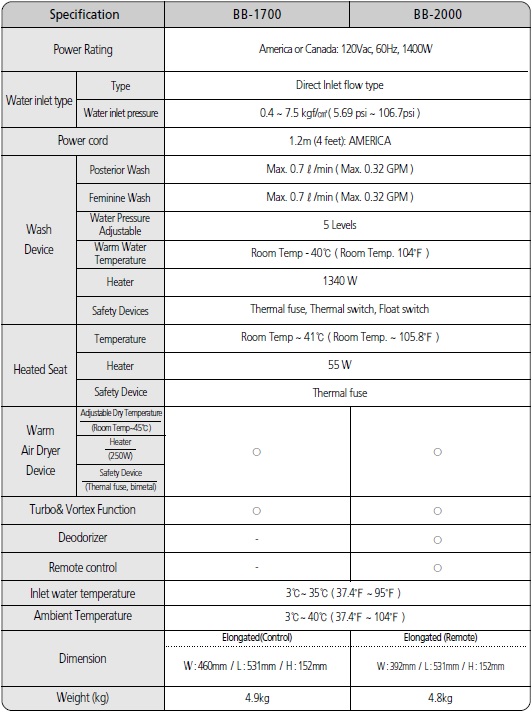 Comfort Arms - Armrests for the Toilet Sold Out

Comfort Arms - Armrests for the Toilet

Unfortunately, the Comfort Arms in both standard width and extra wide width are out of stock.  We are in the process of sourcing this product... The Bio Bidet BB-1000 is a great all around bidet and has a very effective enema wash for people who have issues with constipation.  You... This good-looking Grabcessories toilet paper holder is a very subtle grab bar.  Studies show when people need help up or are falling they grab whatever... The Mariner Rehab Shower Commode Chair from Invacare is sturdy, versatile, and loaded with features.  It's one of the best in the market, in our...